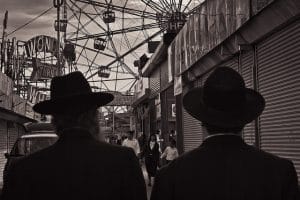 But in the deeply insular world of ultra-Orthodox Judaism, few such advances are being made. Chani Getter, a program coordinator at Footsteps, a nonprofit that helps people transition away from the ultra-Orthodox community, said that ‘œcoming out’ has a twinned meaning for the people she works with. Because of its strictly implemented gender roles, there is no room in the ultra-Orthodox world to be queer or trans. This means that coming out marks a person’s departure from the religion altogether, usually at the expense of family, friends, and one’s entire life as they previously knew it. ‘œComing out’ as being non-religious is every bit as significant to a person’s life as coming out as gay or trans.

What it feels like to find Footsteps, a place where people at long last are accepted and seen: ‘œI immediately burst out crying, and I just sat in her office, sobbing,’ he said. ‘œIt was just so overwhelming. It was like, I made it. I’m safe. It was just the strangest feeling.’