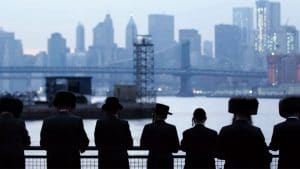 The directors of ‘Jesus Camp’ explore the high price of freedom for three Hasidic Jews who left the fold.

Think what it would take for someone born into such a tightly guarded culture to pick up and leave.

That’s precisely the struggle that One of Us illuminates. Following three former Hasidim over a fraught and eventful three-year period, Heidi Ewing and Rachel Grady have made their most powerful and complex film. Netflix plans to stream it worldwide in the fall, and its deeply personal insights into a shrouded subculture should generate a wide viewership.

While Etty, Luzer and Ari are among a minority, it’s a significant enough minority to keep the not-for-profit organization Footsteps busy, providing social and vocational guidance for people who have left ultra-Orthodox sects.

They’ve crafted compassionate, hard-hitting studies of works in progress ‘” portraits that may disclose dark secrets of a circumscribed world, but which also tap into something regrettably universal.

Coming to Netflix on October 20th

Watch One of Us trailer here.