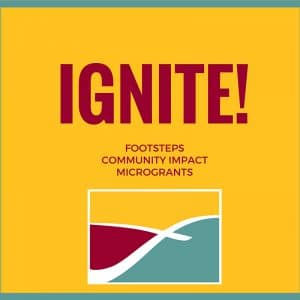 For a closer look at what kinds of impact are in the works,

we proudly introduce the inaugural class of IGNITE! recipients:

Please check back for our next round of microgrants. 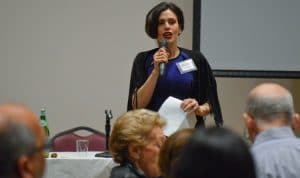 FRAIDY REISS, Unchained at Last
Award: $4,500
Unchained At Last is the only organization in the U.S. dedicated to helping women and girls leave or avoid arranged/forced marriages. Unchained provides women and girls with free legal and social services and emotional support. Just last month, the New Jersey assembly voted overwhelmingly in favor of A3091, a bill Unchained wrote to end child marriage. Fraidy Reiss, who founded Unchained out of her own traumatic experience escaping an abusive arranged marriage when she was 19, was interviewed on Fox5 after the decision.

GENE STEINBERG, OTD Meetup
Award: $3,000
OTD MeetUp is a social group for individuals from formerly Orthodox Jewish backgrounds who meet on a regular basis for good food, thoughtful conversation, and camaraderie. This grant supports an event called The OTD Prom ‘“ It’s Never Too Late. As Gene wrote in his application, ‘œToo often OTD individuals feel like we missed out on opportunities and at this point it’s too late’¦ OTD Prom will provide individuals with the chance to participate in an authentic American experience. But even more so, this event will incorporate the ‘It’s Never Too Late’ theme, driving home the message that ‘¦ it’s never too late to begin following our dreams.’

MALKY LIPSHITZ AND MELISSA WEISZ, Malky Squared Productions
Award: $2,500
Footsteps awarded Malky and Melissa a grant for their start-up film production company, which is currently in post-production on their first short film, a story of two Hasidic girls who fall in love in summer camp. As they explain in their application: ‘œThis is a way for us to give voice to our experience as women growing up within the Chasidic community and making our choices in our lives as artists in the secular world. Starting the production company is a dream come true. It is a way for us to express our unique transition into secular society with universal themes through the art of film. We hope to portray the experience of transition and growth with a sensitive and subtle brush stroke. With authenticity and color.’ 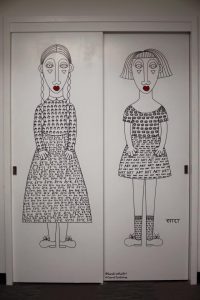 Award: $2,000
Sara Erenthal is a Brooklyn-based, multi-disciplinary artist whose work focuses on themes of displacement, survival, and liberation. Born into an ultra-Orthodox Jewish family, she left home at 17 to avoid an arranged marriage and has spent the last two decades creating art and traveling the world. Erenthal has presented her work in solo and group exhibitions in New York and abroad, in addition to mural commissions and public art projects throughout New York City. Her work has been reviewed and profiled in The New York Times, The Daily News, Vice, The Village Voice, The Jewish Week, and The Times of Israel.  Sara will use this grant to organize a solo exhibition in February 2017 at the well-regarded Five Myles Gallery. The opportunity will help Sara take her art career to the next level. The exhibition will focus on self-realization. ‘œMy hopes are that I can leave a strong impact and inspire visitors ‘“ formerly Orthodox Jews and people in general from all walks of life.’ Seen left is work she created that adorns Footsteps’ wall.

YOSEF RIVKIN & CHANA SCHWARTZ, Brooklyn XO
Award: $2,000
Yosef and Chana proposed a low-cost way of addressing the community building need which was front and center in Footsteps’ strategic planning conversations. This grant will go towards supporting and facilitating bi-monthly Shabbat meals which will serve as an inclusive space for Jewish, non-Jewish, Orthodox, and Formerly Orthodox individuals. Both Yosef and Chana have track records for success in organizing events for the OTD community.

TODD KADISH, Formerly Fundamentalist
Award: $2,000
Formerly Fundamentalist, a social group for people who have left varying faith backgrounds, will use the award to build out organizational needs. The group was started in 2013 by Footsteps members and has expanded to include people living in the New York City area who left various insular and fundamentalist religious groups for secularism or more accommodating forms of belief. This general operating grant will assist Formerly Fundamentalist with exploring programming beyond social events, raising awareness about the group, and infrastructure needs such as gaining tax-exempt status.

ESTHER LITCHFIELD-FINK, The Moment I Knew
Award: $1,500
Esther will use the grant to create an interactive website that focuses on important moments in the ‘œOTD (Off the Derech)’ journey. As a professional writing coach, she will develop worksheets to guide members in sharing the pivotal moments in their journey of discovery. This social media project will help enliven the online OTD community.

LIBBY POLLAK, YouTube Channel
AWARD: $1,000
This grant will help Libby Pollak, who has an active social media presence, including over 1,000 followers on Periscope, to launch a YouTube channel that will inspire and advise those leaving the ultra-Orthodox community. Libby has shared her story with The New York Times in a recent article (In Brooklyn, Stifling Higher Learning Among Hasidic Women) about the failure of the yeshiva system to provide a basic education.

With gratitude to our seed funders