Want to learn more about Footsteps and its mission? Here you will find a collection of articles, videos, interviews, and blog posts about the Footsteps staff, members, and organization. Don’t worry ‘“ we know how important confidentiality is to our membership. Everyone interviewed and mentioned on this page gave their consent.

Footsteps’ Executive Director, Lani Santo, speaks with Unorthodox cast members and long-time Footsteps members Eli Rosen and Melissa Weisz about their stories of finding freedom and forging their own paths out of ultra-Orthodoxy.

The video begins a few minutes after our formal program started; it opens with Eli answering the first question: “For Esty, leaving was a dramatic move of getting on a plane and flying off to Germany. Did you have a dramatic moment like this where it became clear you needed to leave? Or was it more gradual?”

Netflix’s ‘Unorthodox’ has become a favorite to binge watch as we hunker down at home these days. The success of this Yiddish language show has raised many questions about its accurate portrayal of Hasidic life in Brooklyn. Check out the video below for a conversation with Eli Rosen, who played Reb Yossele, was the production’s Yiddish translator and consultant, and is a Footsteps member; Abby Stein, activist, ‘Becoming Eve’ author, former Hasidic Rabbi, and Footsteps member; Alexa Karolinski, co-creator and co-writer of ‘Unorthodox’; Chavie Weisberger, Director of Community Engagement at Footsteps; and Rukhl Schaechter, Editor of The Yiddish Forward about the reality of leaving Hasidic communities and how one woman’s story was adapted. 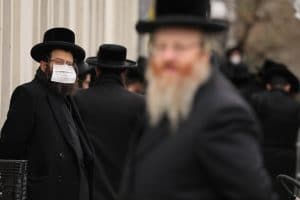 Hasidic communities are facing a unique challenge when it comes to controlling the spread of the coronavirus. I fear that in these places, highly communal lifestyles combined by skepticism about the need for social distancing ‘” at times promoted by religious leaders ‘” are going to cost more lives. One rabbi I know of mocks the ‘œhysteria’ around the virus and still holds services in his sanctuary.

The main ZIP code in the ultra-Orthodox hub of Borough Park in Brooklyn has the second-highest number of reported positive cases in New York City. Rockland County, N.Y., has the state’s highest rate of Covid-19 infection per capita, and the second-highest in the country. Authorities say the numbers are partly explained by the communities there where Orthodox residents haven’t conformed to social distancing.

I believe a lack of information about this unprecedented threat ‘” and what it will take to survive it ‘” is part of the problem. 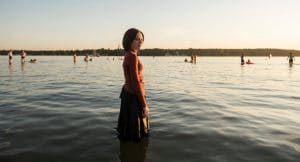 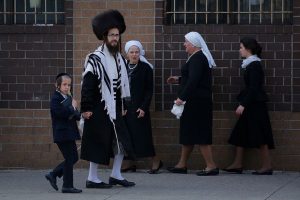 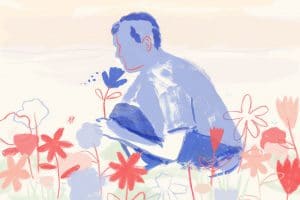 I looked him square in the eye and thought, ‘œI’m ready for The Talk.’

He was not my father, and I was not a boy about to reach puberty. He was my college science professor. I was 24. 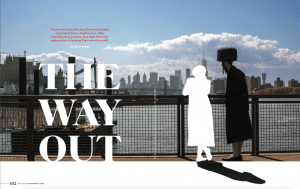 Imagine you’d never seen The Wizard of Oz. Or gotten sunburned at the beach. Or twisted apart an Oreo and made tooth tracks in the filling. Or pawed at your tenth-grade boyfriend in the back of a Honda Civic. Imagine you’d never learned how fun it was to stay at the Y-M-C-A, or taken scissors to your jeans to make short-short cutoffs. Or shaded in the bubbles on an SAT with a freshly sharpened number 2 pencil. Imagine you’d never heard the song ‘œImagine.’ Or driven a car. Or celebrated Thanksgiving. Or learned that dinosaurs once existed.

Footsteps’ has so many great programs to help members discover their passions and build lives of their choosing. Learn about a few in these videos.

Nataly Antar grew up in a Hasidic Jewish community in Brooklyn. Due to the strictness of that society she decided to leave, but that meant leaving behind everything and everyone she had ever known ‘“ including her children. This is one woman’s story about finding her own path.

‘œI think the city should have taken a much tougher approach the minute they realized our allegations seemed to be true, that tens of thousands of children are being denied an education,’ he [Naftali Moster, YAFFED executive director] said. 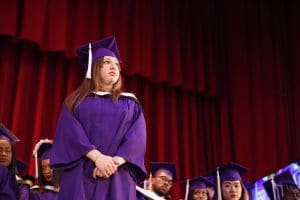 Recently, iHeart Radio interviewed Tsivia Finman, Interim Executive Director, about the uphill battle Footsteps members face in family court. As Tsivia says, the community galvanizes around the people who stay, leaving the person who wants out — even if it’s the primary caretaker — to fend for themselves.

Listen to the full interview above or here. 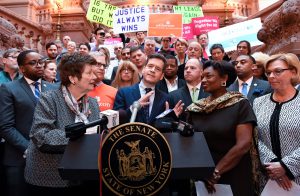 For more than a decade, victims of childhood sexual abuse in New York have asked lawmakers here for the chance to seek justice ‘” only to be blocked by powerful interests including insurance companies, private schools and leaders from the Roman Catholic Church and Orthodox Jewish communities.

But in November, Democrats won control of the Senate. And on Monday, both the Senate and Assembly overwhelmingly approved the Child Victims Act, ending a bitter, protracted battle with some of the most powerful groups in the state. Gov. Andrew M. Cuomo has promised to sign the bill into law.

Under the new law, prosecutors could bring criminal charges until a victim turned 28 [extending the period from age 23] and victims could sue until age 55. The bill would also create a one-year ‘œlook-back window,’ during which old claims that had already passed the statute of limitations could be revived.

Would you be able to leave everything you have ever known behind in order to follow your dreams?

That was the choice Izzy Posen, a Hasidic ultra-Orthodox Jew faced when he decided to leave his isolated religious community.

He told BBC World Service how his life has been transformed since breaking free. 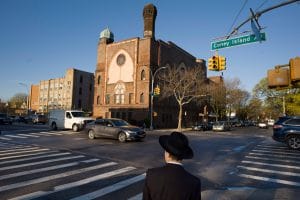 In parts of New York City, there are students who can barely read and write in English and have not been taught that dinosaurs once roamed Earth or that the Civil War occurred.

That is the claim made by a group of graduates from ultra-Orthodox Jewish private schools called yeshivas, and they say that startling situation has been commonplace for decades.

Over three years ago, Mayor Bill de Blasio’s administration opened an investigation into a lack of secular education at yeshivas that serve about 57,000 students in the city, but the probe essentially stalled almost as soon as it began. The reason, advocates say, is the city’s politicians, including the mayor, are fearful of angering the Orthodox Jewish community that represents a crucial voting bloc in major elections.

‘œThere’s no time to waste,’ said Naftuli Moster, the founder of Young Advocates for Fair Education, which pushes for more secular instruction in yeshivas. ‘œNew York City has already been dragging its feet for three years.’

Leaving the ultra-Orthodox community is nothing new in Israel. Everyone, secular or religious, knows someone who used to be on, but is now ‘œoff the derech.’ But the phenomenon hasn’t been well studied. Most of what we know comes from individual stories of people making the difficult transition from the insular Haredi world to mainstream Israeli society.

Now there is data to flesh out these stories, in the form of a report commissioned by the Israeli nonprofit Out For Change. The report provides a picture of ex-Haredim in unprecedented detail, estimating how many people leave Haredi communities each year, and describing who they are and why they leave. It also discusses new programs to serve the needs of ex-Haredim, many of them partnerships between nonprofits and the Israeli government. Still, it argues that much more must done to support ex-Haredim in the ways they deserve. 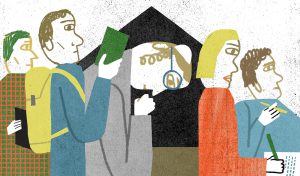 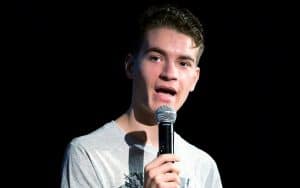 Chavie Weisberger grew up in an ultra-Orthodox Hasidic community in Monsey, New York, where she raised her three children after her 2008 divorce. But as she began questioning her faith and her sexuality, her neighbors told the religious authorities there that she was allowing secular behavior in her home.

Her estranged husband sued for custody and won, in a secular Brooklyn court ‘” it upheld a religious court document she signed at the time of her divorce. Weisberger didn’t realize that in it she’d agreed to raise her children Hasidic.

Ultimately, another court overturned that decision and restored full custody to Weisberger.

Here & Now‘s Robin Young talks with Weisberger (@iamchavie) about the issues faced by Hasidic men and women who leave the community, and is also joined by Lani Santo (@notinabox_ls), executive director of Footsteps, a social services organization that provides social and financial services for those transitioning to a secular lifestyle.

Listen to full interview below or here.

This is the last of a three-part series on insular enclaves of ultra-Orthodox Jews, the struggles they face, and the controversies that follow them.